Is this your first time to own or operate a Roomba? You may find this robot highly useful especially when you are too busy or too tired to clean the house. But after several cleaning cycles, you’d have to face the inevitable which is to empty the bin that’s been full of debris and dust.

The Roomba may be a smart robot vacuum but except for the new i7+ models, it would still need to have its bin emptied. So how do you empty the Roomba’s bin? And how would you know that it is time to do so? This article will teach you how.

How to Empty the Roomba 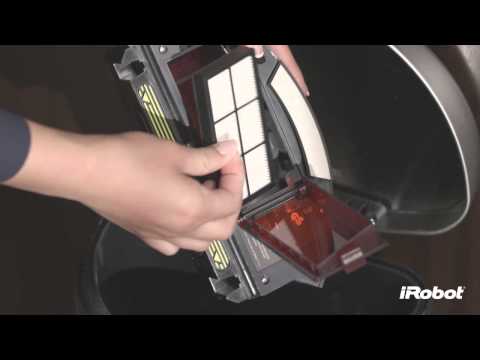 While there are many things to love about the Roomba models, this robot vacuum cleaner has its share of flaws. One of those is that its bin tends to fill up more quickly because it is smaller than an average vacuum cleaner.  Hence, you’ll find yourself emptying the bin regularly.

Don’t be surprised, too, if you have to empty the bin while in the middle of a cleaning cycle. It can be quite annoying but this is something you’ll need to do if you want the Roomba to be operating at a high level for a long time.

While emptying the Roomba is a manual task that you cannot skip, the good news is that it is something you can do. It’s not a complicated task by any definition.

We’ll discuss how to empty the Roomba according to the series models. If you have the Roomba 400 series, look for the bin release button located below the CLEAN button. Press this and pull to remove the bin.

Tap the bin against the trash can to remove the accumulated dirt and debris. You should then clean the filter compartment and replace the filter.  It is also a good idea to inspect and clean the brushes before reinserting the bin.

For the Roomba 500 and 600 series, start by pressing the bin release button.  Then open the bin door, pull the filter, and shake off the bin in order to empty its contents into a trash can. Once you have removed the accumulated debris, reinstall the filter and put the bin back into the unit.

Remember that the bin and filter of the Roomba 500 and 600 series models should not be washed. It should also not come in contact with water or any liquid, for that matter. The filter must also be replaced at least once every two months.

Cleaning the bin of the Roomba e and I Series models is likewise easy.  Start by looking for the bin release button located on the back of the robot vacuum. Press it to open the bin door.

Then hold the side of the filter to remove it from the left side of the bin. Once the filter has been removed, tap it against the trash container to get rid of the accumulated debris. Replace the filter but never wash it as it is not designed to come in contact with liquid.

However, you may rinse out the bin to remove excess debris. Use warm water and let it dry. Don’t put it in the dishwasher. Make sure that the bin is completely dry before placing the filter back into it and sliding the bin into place.

The Roomba 800 and 900 series models have slightly different mechanisms for emptying the bin. These Roomba models are equipped with AeroForce Bins which are capable of packing higher dirt capacity.

In emptying the Roomba, grasp the bin release button located at the back. Press it to remove the bin. You can then shake the bin to get rid of the accumulated dirt.

On the side of the bin is the filter door release tab. Squeeze and lift it to find a yellow tab. Grasp that tab in order to release the filter. Shake off any debris by tapping it against the trash can. [How to Clean Roomba Vacuum Side Wheels?]

When to Empty the Roomba Bin?

It is recommended that the bin of the Roomba is emptied after each use. This goes for all the models of the robot, from the Roomba 400 Discovery series to the Roomba 800 and 900 series.

The Roomba e and i Series models, meanwhile, would let you know that the bin is full and thus, need to be emptied.  There is a Full Bin Indicator that will flash under the CLEAN button. This will also show up in the iRobot Home App.

In the Roomba i Series, the Light Ring surrounding the CLEAN button will flash red and towards the rear of the said button. In the E Series, the Full Bin indicator will also flash on the robot.

But if you want a Roomba that spares you the hassle of emptying its bin, then you should get the Roomba i7 Plus. It is considered the best Roomba model to date because it is the only one smart enough to empty its bin.

The catch is that you will have to pay a hefty price for the Roomba i7 Plus– nearly a thousand bucks!

Emptying the bin of the Roomba is one of those critical tasks you should regularly do if you want your robot to last a long time.  Fortunately, emptying the bin is not a hard task at all. Make sure that you do this after every cleaning cycle of the Roomba.