The home vacuum cleaner industry has undergone a revolution in the past few years. Rapid rise in technology, entry of new brands in the market and the resulting fall in the prices of models means that if you’re a homeowner in search for a vacuum cleaner, the options are endless for you.

Still, despite having so many options, most people still prefer Shark vacuums.

Apart from their introduction and usage of bagless vacuums, these cleaners have completely revolutionized the way we vacuum our homes. Add to the equation their ease of maneuverability, huge suction power, and considerable dirt capacity, and it gets easier to see why Shark rules.

Nevertheless, as effective as they are, some Shark vacuums still pose challenges to their users, with the most frustrating being them losing their famed suction power. And since you have come to this article, it means you’re facing a similar problem whose only solution lies in resetting the motor. 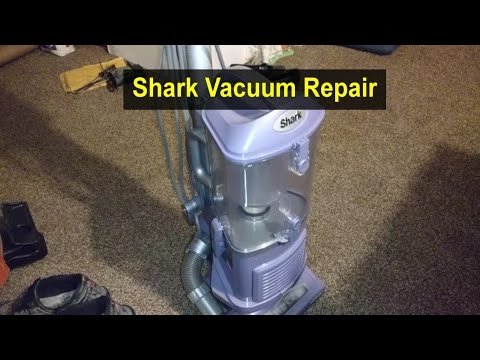 As you might guess, you cannot just open the body of your Shark and replace the vacuum with bare hands. There are some tools which you need to have before getting in on the motor replacement process. Make sure you have them BEFORE you start resetting your Shark’s motor.

Got all the abovementioned tools in your custody? Then let’s kick things off.

After unplugging the vacuum, detach the hose which will be attached to its bottom. You might have to forcefully pull the hose to detach it from the casing.

Then, lay the vacuum on one side. Once you’ve done that, you might be able to see a rubberish button located on the underside of the vacuum. Press it to separate the vacuum’s body from its head.

Once you have detached the vacuum head from its body, flip it over. Make sure that as you do that, the brush head should be facing towards the ceiling.

Now, you have to remove the front wheels. To do that, insert the metal spudger in the front area of the wheel and slowly pry it up so that you can see the screw beneath it. Repeat this procedure with the other wheel as well.

Successful completion of the last step should reveal to you the screws hidden beneath the wheels. Once you can see them, use a screwdriver to remove both the 18mm screws.

Afterward, you could see four more 18mm screws located on the middle/bottom of the vacuum head and the top corners. Unscrew them as well using a screwdriver.

The inside of the large wheels would also have two screws attaching them to the body. Use a screwdriver to remove them. The reason why you have to remove all these screws is that they’re keeping the vacuum’s plastic casing attached.

Therefore, as long as you haven’t removed all the screws, you won’t be able to successfully remove the casing and reset the motor. So you have little choice but to do it.

Once you have successfully removed it, you’ll be able to see the motor located on the top left side of the headshell of your Shark.

To remove the motor, you’d first have to remove its belt from the motor gear – which you can do by first sliding its belt to the extreme right using bare hands. You should be able to remove the motor now. To reinstall the new motor, just follow steps 1-6 in reverse – i.e. start with the sixth step and finish with the first.

Shark might be the only brand on the market whose upright vacuums are as famous as Shark vacuums for pet hair. Regardless of which type of vacuum you might own, there might come a time after a few years when its motor would need reset and replacement.

Provided that time has already descended on you, you’ve come to the right place. By following the abovementioned steps, you can easily (though not effortlessly) reset and replace the motor of your Shark vacuum.